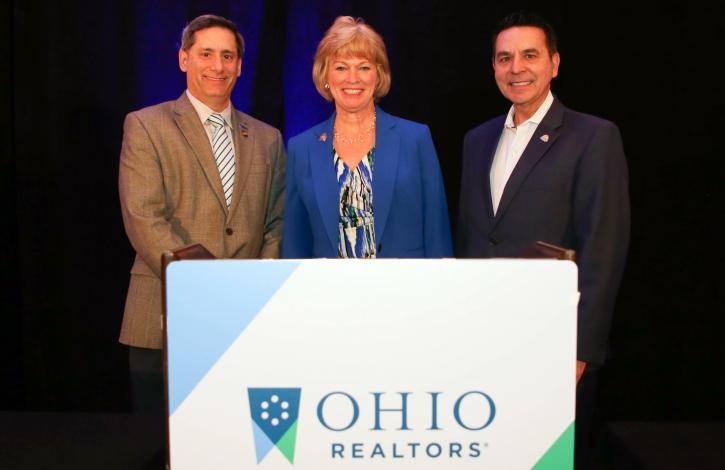 Chris Reese of Columbus assumes office as the 2020 president of the Ohio REALTORS. Joining Reese on this year's Leadership Team are President-elect Seth Task of Cleveland and Treasurer John Mangas of Toledo.

Reese is broker/owner of Metro II Realty. Initially licensed in 1977, Reese began her career working for her father, Jim Luebbe at Metro II Realty, until she took over as broker in 2007.

On the local level, she served as President of Columbus REALTORS in 2006. She was co-founder of the original Columbus Independent Broker’s Association in 1995 and President of the Columbus Women’s Council of REALTORS in 1997. Reese has served on and chaired numerous committees for her local board and was named Columbus REALTOR Broker of the Year in 2009 and the recipient of “Charter Class” Lifetime Achievement Award in 2005.

On the state level Reese has served as an Ohio REALTORS District Vice President (2009-2010) and has been a Director since 1997. She has served on multiple committees and has chaired the Strat Planning Committee, Professional Development Committee, RPAC Fundraising Committee, My Realtor Party Committee and is current chair of the Finance Committee.

Nationally, she served as the 2018 Chair of the Large Board Forum, and as a National Association of REALTORS (NAR) Director (2004-2009, 2014-2015, 2017-2019) and served on several committees, including Consumer Communications, MLS Policy, Real Property Evaluation, and Resort & Second Home. In 2018, she was chair of the NAR Large Board Forum. She was inducted into the prestigious National REALTORS Political Action Committee (RPAC) Hall of Fame in 2019. Reese is also a member of the inaugural class of the Ohio REALTORS RPAC Hall of Honor inducted in 2019.

Reese holds NAR’s Certified Residential Specialist (CRS) designation. Civically, she has volunteered for the Campaign for Cancer Prevention, March of Dimes, and Meals on Wheels. She served as a Trustee for Homeport by the Columbus Housing Partnership.

Task has served as member and in leadership on a variety of Akron Cleveland Association of REALTOR Committees, including serving as its first president in 2014 after participating on the merger task force between the former Cleveland and Akron boards. He leads The Task Team and has been a REALTOR since 2005. He has appeared before the Federal Reserve Bank, FHFA, Rural Housing Services and the Department of Housing and Urban Development as an expert in his field.

On the state level, Task served as a member of the Board of Directors since 2011. He has served on and often lead a number of the organization’s committees and task forces, including: Executive, Finance, Legislative Steering, YPN, Convention, Professional Development, Global Business Alliance and Communications, among others.

Task has served as a chairman of the NAR Federal Finance & Housing Policy Committee and is currently on the board of directors of NAR as well as Chair of the Conventional Financing & Policy Committee. He earned the Green and Certified Residential Specialist (CRS) professional designations from NAR and is a 2015 NAR Leadership Academy graduate. He contributes to RPAC at the Golden R Major Investor level and as a President’s Circle member. Task is a member of the inaugural class of the Ohio REALTORS RPAC Hall of Honor inducted in 2019.

Civically, he has been involved with the Solon Chamber of Commerce, served on the Board of Directors of Neighborhood Housing Services of Greater Cleveland, and has been a Cleveland Masonic Lodge Brother since 1995. He and his wife, Lesley, live in Gates Mills with his two sons, Ryan and Elliot. His daughter Madison is a graduate of The Ohio State University and resides in Columbus.

Mangas has served as a member and in leadership on a variety of Toledo Regional Association of REALTORS Committees, including serving as its President in 2014. Additionally, he was honored as its Citizen of the Year in 2016, REALTOR of the Year in 2009 and has chaired the Toledo Regional Association’s RPAC and Legislative & Government Affairs committees, among others. Mangas, who was first licensed in 1981, opened RE/MAX Preferred Associates with Kathy Kuyoth in December 2001.

Civically, he has been past chair of the United Way Community Builder Program. Additionally, he has been involved with the Children’s Miracle Network and the Susan B. Komen for the Cure for the past 26 years, raising more than $400,000. Mangas is an active member and parish council member, of the Olivet Lutheran Church in Sylvania.