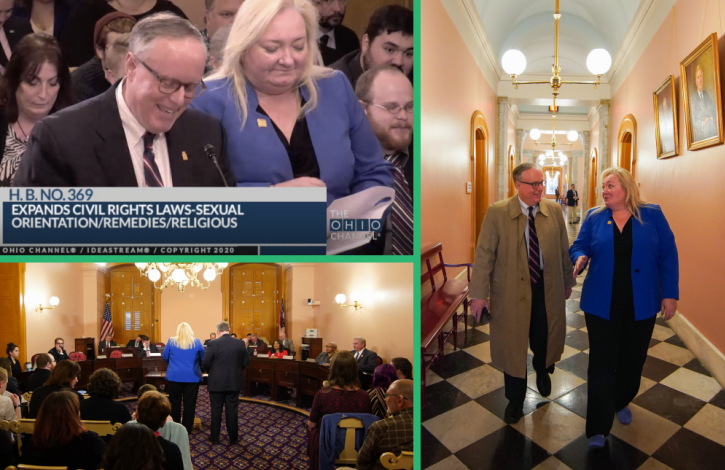 Anjanette Frye, Immediate Past President of Ohio REALTORS, and fellow Past President Steve Brown, who also served as 2014 President of the National Association of REALTORS, offered the industry's support for the sections of HB 369 directed at fair housing practices. The measure, sponsored by Rep. Brett Hillyer (R-Uhrichsville) and Rep. Michael Skindell (D-Lakewood), seeks to expand many of the Ohio Civil Rights Commission law's existing prohibitions against discriminatory practices to apply to "sexual orientation," or "gender identity or expression."

Brown told lawmakers that organization's support is found in Article 10 of the NAR Code of Ethics, which stipulates:

REALTORS, in their real estate employment practices, shall not discriminate against any person or persons on the basis of race, color, religion, sex, handicap, familial status, national origin, sexual orientation, or gender identity.

"Although we would like to believe that housing discrimination does not occur in today's marketplace -- let alone discrimination based upon a person's sexual orientation and/or gender identity/expression -- we would be sadly mistaken," Brown said. "Housing discrimination remains a real occurrence and this legislation is a critical step in providing important protections."

Both Brown and Frye weaved personal experiences of discrimination into their testimony.

"As Steve highlighted, this legislation is vitally important because, despite our best efforts, discriminatory practices exist," Frye said. "My family, unfortunately, experienced this first-hand when my wife, daughter and I purchased a home in the Dayton area two years ago.

"While we were looking at homes, the seller asked my daughter where her father was. She pointed at me. The seller responded that my wife was too pretty not to be with a man and that the neighborhood did not have any people like "us," Frye continued. "In my daughter's eyes we are like the other neighbors. She began to tell the seller we like to plant flowers and decorate our house for Christmas. She asked the seller if the other neighbors like to decorate at Christmas. A child's innocence and honesty -- we can all learn something from our children.

"Needless to say, we walked out of that home sad and angry," Frye told Committee members. "You see in her eight years of life we had managed to shield her from the discrimination of being a same sex family only to have it thrown back in our faces that we are different and many not fit in the neighborhood. Discrimination is real and is in our lives daily."

Brown stressed that HB 369 is consistent with everyday practices of Ohio REALTORS, noting that a tenet of the Code of Ethics requires REALTORS to identify and take steps, through enforcement of the Code of Ethics and by assisting appropriate regulatory bodies, to eliminate practices which may damage the pubic or which might discredit or bring dishonor to the real estate profession.

"Our current laws do both," Brown testified. "They damage the public because discrimination for any reason other than the buyer's inability to qualify hurts everyone in the market. It is simply bad business. Worse, it dishonors the American Dream of homeownership. It brings discredit to whole communities through the actions of a bigoted few, and to those REALTORS who, for fiduciary reasons, must remain silent.

"But we will no longer remain silent and we respectfully ask for your support of HB 369 -- not just because of our Code of Ethics...not because we have a personal interest in this legislation since we're both gay...but because it is the right thing to do. Every Buckeye deserves to be treated with equality," he added.