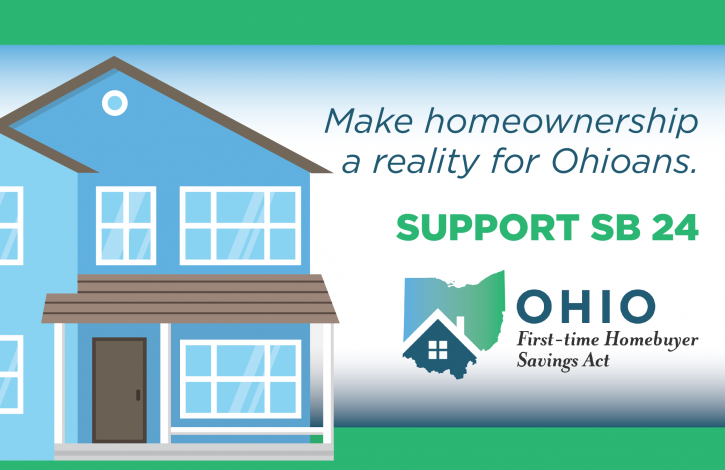 The Ohio Chamber of Commerce and Ohio Realtist Association provided testimony supporting the measure authorizing income tax deductions for contributions to and earnings on savings accounts designated for the purchase of a home in Ohio during the hearing.

"We see the inherent value of this bill for Ohioans creating an opportunity for first-time homebuyers to save for the American dream of homeownership. This bill creates the roadmap needed by so many to make this dream a reality," wrote Veronica Bedell-Nevels, president of the Ohio Realtist Association. "We appreciate that the First-time Home Buyer Savings Account is simple and easy to explain to every Ohioan."

SB 24, introduced by Sen. Theresa Gavarone (R-Bowling Green) and Sen. Bob Peterson (R-Washington Court House), would authorize a first-time homebuyer to open a tax-deductible savings account in which a person can deposit money with the goal of using it toward a down payment of a home purchased in Ohio. A “first-time homebuyer” is defined as someone who has not purchase or owned a home within the past three years. Although a person can put as much money as they want into the savings account, the interest earned and capital are deductible with annual limits of $5,000 for single filers, and $10,000 for joint filers. There’s a lifetime deductible cap of $50,000 for single filers and $100,000 for joint filers.

The money must be used toward the purchase of a home including closing costs and bank fees within 15 years or a penalty may apply. Anyone can open an account, and an account holder can have an account for themselves or for another person, such as a child, or grandchild. It also includes an exemption for active duty military personnel to not be penalized if they’re called to duty out of Ohio, and they need to either move or be out of the state for extended timeline.