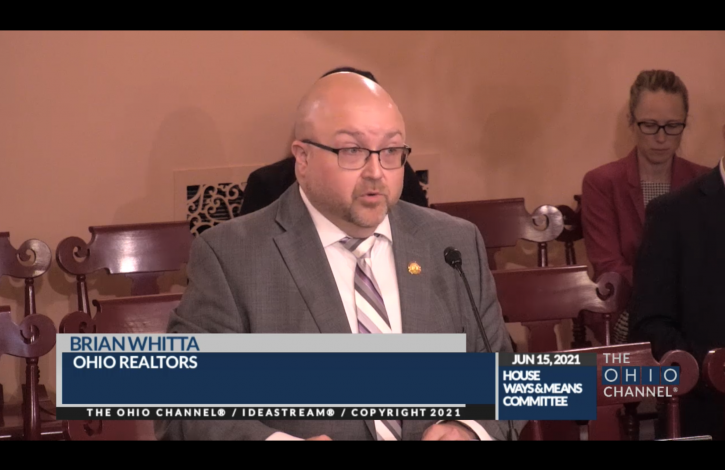 Ohio REALTOR Brian Whitta, of Findlay, testified on behalf of the industry yesterday in support of House Bill 186, the Ohio First-Time Homebuyer Savings Act, before the House Ways & Means Committee. The bill, sponsored by Representatives D.J. Swearingen (R-District 89) and Shane Wilkin (R-District 91), is designed to allow first-time homebuyers to open a tax-deductible savings account for use toward a home purchase.

Whitta said the measure, which is a companion to Senate Bill 24, is a top legislative priority for the more than 36,000-member Ohio REALTORS, noting that "we believe this savings tool will help Ohioans who are interested in owning a home someday realize the American Dream."

If passed, Ohio would join states like Colorado, Montana, Virginia, Oregon, Iowa, New York, Minnesota, Mississippi, and others to offer First-Time Homebuyer Savings Accounts. The program allows a first-time homebuyer to open a tax-deductible savings account for use toward a down payment of a home purchased in Ohio.

During his testimony, Whitta told lawmakers:

The dream of homeownership for first-time homebuyers has become a challenge in recent years and especially this past year, despite historic low interest rates. Scarce inventory and quickly rising home prices have played a significant role in lowering the number of first-time homebuyers nationally to 31 percent, the lowest share since 1987, according to our 2020 Profile of Home Buyer and Sellers Ohio Report. Additionally, a recent report by Deutsche Bank Research showed the current median age of homebuyers was 31 years old in 1981. Today the median age is 47 years old. This is a trend we would certainly like to reverse, and we strongly believe this legislation is an important step in that direction.

One of the most significant challenges to homeownership is a down payment, as you can imagine. Many first-time homebuyers come to the home buying process unaware of the significant cash that is required at the closing, leaving them unprepared and waiting longer and longer to save and buy. Practically speaking, I work with many first-time buyers and often I find they simply are unprepared for the homebuying process. House Bill 186’s “forced” savings account could help Ohioans be more financially responsible and gain a small tax benefit at the same time.

In 2019, Ohio ranked sixth in the nation for highest outbound migration meaning more people are moving out of Ohio than moving in. That reduction in population has resulted in our state losing one Congressional seat, as you know. It is important to keep talent -- young and old -- in our great state. The bill would require the funds to be used to purchase a home in Ohio. Of course, we want to encourage people to not only plant roots in Ohio, but also for people thinking about moving into Ohio this is yet another great reason to become a Buckeye.

Although this savings program will not reduce all barriers to homeownership, it is certainly a tool that will help hard-working Ohioans move closer to their goal. We believe House Bill 186 is a reasonable approach as it would promote financial literacy through smart saving over the course of several years to achieve the American Dream of homeownership. A person is rewarded for their long-term commitment to save for a home with a small tax benefit that would add up over the years.

Why is homeownership so important? When we talk about dollars and cents, simply put homeownership is great for the Ohio economy. A recent study using data from the Bureau of Economic Analysis, the US Census, National Association of Homebuilders, and Macroeconomic Advisors found that in 2020 the Ohio real estate industry accounted for $103.5 billion or 15.3 percent of the gross state product in Ohio. Additionally, the study found on average each Ohio home sale contributes more than $61,500 back into the Ohio economy through retail and appliance purchases, construction, renovations, and commissions. Homeownership is important in so many ways.

Additionally, owning a home is an excellent personal investment. Forbes recently said, “there are many ways to build wealth in America, but real estate might be the safest, steadiest and simplest way to do so.” Homeownership serves as a “forced” savings account that when done properly, can build generational wealth that can be leveraged later in life or passed onto family. In the Survey of Consumer Finances conducted by the Federal Reserve, the study found that the median net worth of a homeowner is 44 times greater than the median net worth of a renter. The study also found a homeowner’s net worth had grown by 15 percent whereas a renter’s net worth had decreased by 5 percent.

Of course we understand homeownership is not for everyone, but that is why this legislation is great because it is permissive and if someone finds themselves thinking about homeownership they can open up a first-time homebuyer savings account and contribute as much or as little as they can afford.

We also have been working with the bill’s cosponsors and interested parties to make some reasonable, positive revisions to House Bill 186. We are supportive of those revisions and believe the changes make this bill a comprehensive piece of policy that can helps many Ohioans.

As the bill moves through the legislative process, Ohio REALTORS will be sure to update you.