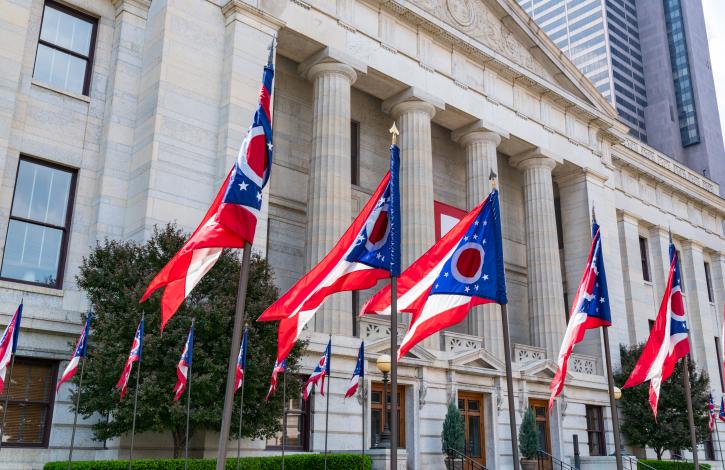 The $75 billion Ohio Operating Budget for Fiscal Years 2022 and 2023 was passed in the late hours of June 28, two days before its June 30 deadline. The Operating Budget, House Bill 110, was introduced earlier this year to serve as the main legislation that will continue to fund state agencies or programs.

During the legislative process, many amendments are introduced and debated and our government affairs staff closely monitors these amendments to protect our members’ interests and the real estate industry as a whole. After numerous public hearings and discussions, House Bill 110 was sent to Gov. Mike DeWine for his consideration and signature.

Ohio REALTORS has been heavily involved in this process to ensure that our members’ interests are represented. Overall, we are pleased with the final product which includes REALTOR priorities and similarly, provisions we opposed were either removed or amended in a manner favorable to the industry.

Below are a few highlights of the budget including some important victories your Ohio REALTORS public policy staff achieved in the FY22-23 operating budget (HB 110) process:

At this time, an implementation date for online license transfers and other functions is not known, but the Division is aware that it is the top priority for the real estate industry. We are grateful to the Department of Commerce and Ohio Division of Real Estate and Professional Licensing for their attention to this matter and making the funding request.

Ohio REALTORS advocated for Fair Housing and protecting private property rights by working with legislators to include clarifying language to allow for the removal of a discriminatory covenant from property deeds. Currently in Ohio there are thousands of Ohio homes with racial and religious discriminatory covenants barring certain protected persons from owning a home. Although these covenants are unenforceable due to the 1948 U.S. Supreme Court Case, Shelley v. Kraemer, and made illegal in the 1968 Federal Fair Housing Act, the language still exists on many property deeds. Many homeowners want the offensive language removed from their property deeds but doing so requires going through the courts which can be expensive and time-consuming. This budget provision will allow a homeowner to remove such illegal deed restrictions more easily by working with a licensed attorney to have the language removed from a deed without having to go to court. The original property deeds will remain unchanged as scholars and historians urge to retain these covenants to help track them and better understand the impact they had on housing and neighborhoods.

We particularly want to thank Rep. Brett Hillyer, Sen. Theresa Gavarone, Rep. Ghanbari, Rep. Jarrells, Sen. Hearcel Craig and Sen. Bill Blessing and many others for their work on crafting this language and advocating for it in the budget process. We appreciate the bipartisan support of the Senate and House on protecting private property rights and Fair Housing and adopting this important provision.

During the 2019 Operating Budget (House Bill 166, 133th General Assembly) process, Ohio REALTORS fought a provision that would have raised taxes on small businesses across the state. Any business that filed as a pass-through entity would have experienced a significant tax impact if that provision had passed into law. Ohio REALTORS lobbied to have that language removed from the 2019 budget with a coalition of business groups and were successful. We continued to monitor any changes during this budget process and are pleased to announce there are no changes to the Ohio small business income deduction or any other tax increases on small businesses in this year’s budget process.

There is more positive news to report on taxes including added tax relief for Ohioans. There was an across-the-board reduction in personal income tax brackets by 3% in the final budget. There are also changes to the lowest and highest tax brackets, including raising the amount an Ohioan would make before they owe any taxes to $25,000, up from $22,151. Additionally, the top tax bracket was eliminated, so for Ohioans earning more than $110,651 their tax rate would be reduced from 4.797% to 3.99%. These tax cuts are retroactive back to Jan. 1, 2021.

There is ongoing discussion on how the state can afford the tax cuts, especially since states are strictly prohibited from using any of the Fiscal Recovery Funds ($5.7 billion) dispersed through the American Rescue Plan to fund state-wide tax cuts. However, the U.S. Department of Treasury has said states are free to cut taxes as long as they can show it can be done through revenue growth and not federal funds.

Despite decreases in the general fund revenue in 2020 due to the pandemic, the outlook in Ohio is extremely positive moving forward. If Treasury plans to use pre-pandemic FY2019 as a baseline to determine if Ohio can afford the tax cuts, projections are very strong and would show that Ohio can indeed cover the tax cuts without using federal aid.

Another important issue to Ohio REALTORS is the sweeping school funding reform that was included in House Bill 110. The House passed its version, dubbed the Fair School Funding Plan, that had been developed over a handful of years. The Senate removed much of the House’s language and replaced it with its version, which was drastically different. In the conference committee of HB 110, where both chambers negotiated the details of the final budget, it was decided the House’s version would largely be adopted. The Fair School Funding Plan is nearly five years in the making. Hundreds of stakeholders and legislators worked over the past years to create a system that would better fund public schools and help lower-income communities get the fair funding their schools desperately need.

Declared unconstitutional nearly 25 years ago, the Ohio General Assembly has attempted many times to address the major school funding problem. The final system that was passed as a part of the Ohio Operating Budget (HB 110) will use a mixture of property taxes and household income wealth to determine tax liabilities and ultimately fund all Ohio schools in a more equitable manner.

Broadband internet expansion funding was somewhat of a rollercoaster as it went through significant changes through the budget process. In the Governor’s budget recommendations, he proposed $250 million to expand residential broadband across Ohio’s underserved communities. The House reduced that amount to $190 million, and the Senate removed all funding for broadband expansion.

Ohio REALTORS lobbied for recently enacted legislation (House Bill 2) that created a residential broadband grant program and advocated for the additional funding during the budget process. We testified in support of additional funding and were very pleased that in the final budget funding was brought back to the original $250 million which would help one million unconnected Ohioans.

A 2019 article in the Journal of Applied Economics found that single-family homes with access to broadband connection have a price that is roughly $6,000 more, or 3% more than similar homes with significantly slower or no connections. If COVID taught us anything, it is that strong broadband is vitally important to the personal, business and educational needs of all Ohioans no matter what part of the state they call home. We are grateful for the full funding of residential broadband expansion.

Affordable housing was thrown a major curve ball in a last-minute amendment that would substantially change how federally subsidized housing and low-income housing tax credit properties are valued for property tax purposes. Currently in Ohio, county auditors value certain affordable housing properties based on how much rent they collect. Many federally subsidized and affordable properties have deed restrictions limiting the rent amounts that can be charged. The change would require auditors to value property at market rates without considering any governmental use restrictions, which would increase the property tax liability and put many of these properties into financial distress.

We are very pleased to report that through the dedicated work of the coalition of housing advocates and business groups, including the bankers and REALTORS, the amendment was removed and instead a study committee was put in place to further analyze the valuation of federally subsidized affordable housing moving forward. Ohio REALTORS received a seat on that study committee and a representative of the association will be appointed by the governor in the coming months.

The Brownfield Remediation Fund will receive $350 million to help offset costs to related to planning, assessment and remediation of environmental contamination and hazardous substances including asbestos, lead-based, paint, petroleum and other pollutants on existing commercial and industrial property sites. The blighted properties are often overlooked by developers due to their unique condition and the potential costs associated with proper remediation and clean-up. The sites can then be used for residential, commercial, industrial, institutional and open-space development. This will be a fantastic opportunity for developers to have more flexibility to create housing opportunities, along with other commercial and industrial development across Ohio.

In an effort to demolish more non-Brownfield blighted properties to create space for new residential and commercial development, the Building Demolition and Site Revitalization Fund will receive $150 million. The funding will spur economic development and investment in communities across Ohio where properties have been an eye-sore and taking up valuable space for new development including housing and retail opportunities.