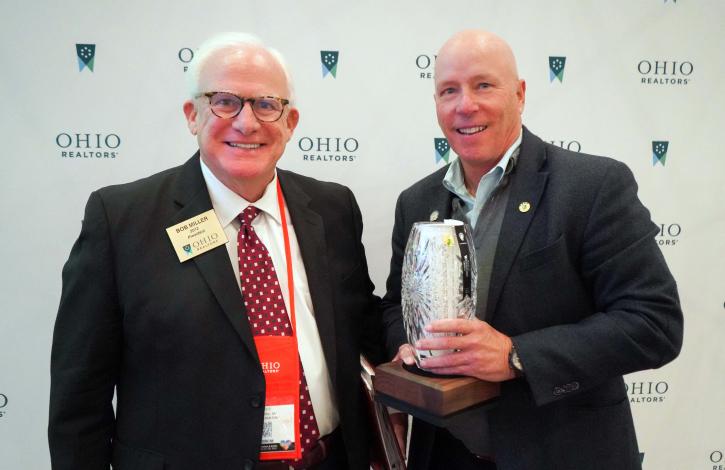 REALTOR Chris Hall, of Oregon, is presented with the Ohio REALTORS 2021 Vincent T. Aveni Lifetime Achievement Award. Chris (on right) is pictured here with 2012 Ohio REALTORS president Bob Miller (on left). The announcement of Hall’s selection was made at the Ohio REALTORS 111th Annual Convention & EXPO, in Columbus, Ohio, September 27-29.

REALTOR Chris Hall, of Oregon, was honored with the Ohio REALTORS 2021 Vincent T. Aveni Lifetime Achievement Award. The Vincent T. Aveni Lifetime Achievement Award recognizes those Past Presidents of the Ohio REALTORS that provided exemplary service to the organization. Aveni served as President of the organization in 1980 and the award was created after his passing in 2006.

At the local level, Hall served as past president of the Toledo Board of REALTORS in 2004 and was honored as REALTOR of the Year that same year.

On the state level, Hall has served as a District Vice President from 2008-2011, and as an OAR Director since the mid-1990s. He has chaired or served as a member of many OAR committees, including Strategic Planning, Local Government, Enlarged Legislative and Legislative Steering. Additionally, he was appointed to The Education and Research Advisory Group by the Superintendent of the Ohio Division of Real Estate and Professional Licensing, until it was disbanded.

Nationally, Hall has served as a director of the National Association of REALTORS (NAR) and as the State Representative to the Risk Management Committee. He earned the REALTOR emeritus in 2019. Hall also holds the CRB (Certified Residential Broker) designation of NAR.

“Chris is an outstanding Ohio REALTOR and embodies everything that the Aveni Award stands for,” said Ohio REALTORS President Seth Task. “Congratulations Chris – and thank you for your continued service.”