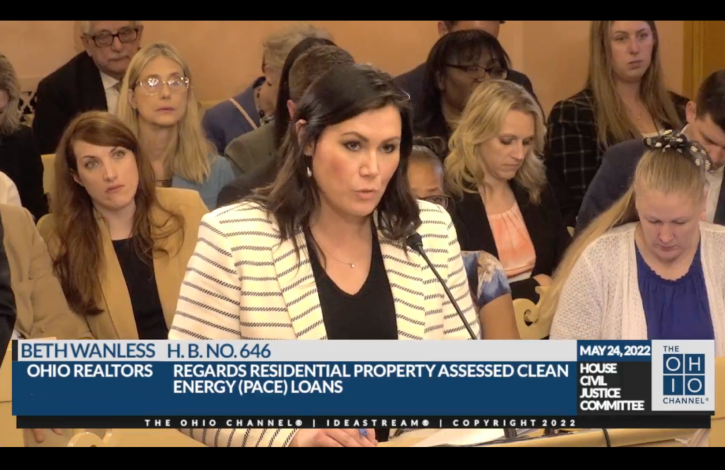 Ohio REALTORS, others testify in support of consumer protection measure

Beth Wanless, Ohio REALTORS Director of Government Affairs, provides testimony in support of House Bill 646 during a hearing at the Ohio Statehouse yesterday.

The PACE program, originally launched in 2009, is currently in operational in California, Florida and Missouri and is making its way to Ohio. Residential PACE allows property owners to finance certain expensive energy efficiency property improvments and is added to the borrower's property tax bill as a priority lien, ahead of the mortgage loan position.

REALTORS were joined by a broad-based coalition of groups supporting the measure, House Bill 646, which was recently introduced by Representatives Bill Roemer (R-District 38) and Al Curtona (R-District 59) to enact guidelines protecting property owners using R-PACE loans. Beth Wanless, Ohio REALTORS Director of Government Affairs, along with Don Boyd, of the Ohio Bankers League, Gina Wilt, with the Coalition on Homelessness and Housing in Ohio (COHHIO), and Dawn Carpenter, of the Ohio Mortgage Bankers Association, offered the following testimony:

In 2009, the White House released policy framework to help local governments create Property Assessed Clean Energy (PACE) programs. Shortly after, Ohio passed a law to allow for “Energy Special Improvement Districts” (ESID) where PACE financing can be used. PACE financing allows property owners to finance certain expensive energy efficient property improvements, such as windows, HVAC systems, roofing, insulation, water conservation systems and much more. The financing is added as a voluntary assessment to the borrower’s property tax bill and rests as a priority lien, ahead of the mortgage lien position and any other previously recorded liens on the property.

The residential PACE program has not been implemented state-wide in Ohio and only three states currently have residential PACE programs: California, Missouri, and Florida. All three states have significantly rolled back their residential programs, however, due to reports of abuse, fraud and homeowners being financially devastated by a program. There is a comprehensive effort by PACE administrators to make Ohio the fourth state with the residential program. However, our groups’ knowledge of the long list of concerns with how R-PACE programs have been implemented in other states is why we are jointly testifying before you today in support of HB 646. What was an innovative concept has resulted in hundreds of homeowners falling into financial ruin as the program has slowly been rolled out.

In all three states with residential property assessed clean energy, hundreds of reports of abuse, fraud and predatory contractors have been reported. In Oakland, California, one elderly homeowner, Theresa Bryson, received a cold call from a contractor who talked her into several home improvements, many of the renovations did not even relate to energy efficiency. The contractor failed to thoroughly explain the program and financing to Ms. Bryson, nor did he tell her the project would be a $135,000 tax lien on her home. As a result, Ms. Bryson’s monthly payment more than doubled from $1,500 to $3,500. There are many stories just like this one.

In Missouri, many homeowners have experienced the same issues with R-PACE. An April 2021 Propublica report found the R-PACE program “disproportionately burdened some of the state’s most vulnerable homeowners.” At the time of publishing, more than 100 homes in the St. Louis and Kansas City area were at risk of being sold at public auction. The homeowners, who signed up for expensive, higher interest R-PACE financing, fell behind on their monthly payments. They were not properly informed of how the program worked and that they could lose their home if they could not pay their monthly payments.

Shortly after this report was published, the Missouri legislature passed a bill to address bad practices by R-PACE administrators and contractors. The legislation enacts several guardrails to protect homeowners and was signed in June of 2021 by Missouri Gov. Mike Parson.

Due to the high-risk nature of R-PACE financing, the Federal Housing Administration, Fannie Mae, Freddie Mac, and the Veterans Administration do not back mortgages on properties with PACE financing (liens). Because the federal programs will not back these mortgages, many traditional lenders will not either. Since the loan stays with the property until sold, borrowers may not be able to access cost-saving refinancing options. This ultimately forces a homeowner who has PACE financing to pay it off before selling their property. If a buyer wants to purchase a home with a PACE lien, they must pay cash or shop around to find a lender willing to engage.

Although Ohio does not have a state-wide residential PACE program yet, a pilot program was launched in Toledo administered by the Toledo-Lucas County Port Authority. This program instituted consumer protections and disclosure requirements to ensure homeowners can pay back their financing, though there are no state level requirements or oversight. Many of these protections are included in House Bill 646. Officials have decided to expand the program to other parts of the state by turning it over to a private, for-profit company to implement. Residential PACE is currently an unregulated program at the state level, and we believe that all homeowners and consumers should be protected. HB 646 would do just that, and implement many of the same protections the Toledo-Lucas County Port Authority enacted.

In fact, the Port Authority was originally working with Renovate America, one of the R-PACE administrators that offered the financing in Missouri. However, Renovate America filed for bankruptcy shortly after, and the Port Authority moved on to work with another large R-PACE administrator. This led many to fear that Ohio will follow in Missouri, California and Florida’s footsteps seeing multiple cases of abuse, fraud and predatory practices leading to increased foreclosures.

What is also concerning is the lack of regulation of who provides the R-PACE financing, which again are property tax super liens. They are administered by private companies hired to handle logistics such as providing financing and approving loans. These individuals often have little to no experience, and no licensing requirements such as a mortgage lender is required to have. Independent Mortgage Bankers are required to receive extensive pre-licensing education and complete eight hours of continuing education annually. Many banks and credit unions require their loan officers to take the continuing education, so they are constantly up to date on regulations and requirements for the loans they produce. Banks and credit unions are regulated by multiple state and/or federal entities and subject to examinations on many items including consumer compliance. In contrast, these unlicensed companies administering residential PACE in turn hire private contractors to both install the upgrades and market the complex financing behind it. In essence, the people with the responsibility of pitching the loan -- that’s technically a tax lien -- are contractors who have no training or license to do so.

Additionally, PACE financing does not require an independent party to assess if proposed energy upgrades, ranging from insulation, new windows, or roofing would offset their costs. With the average PACE financing at $25,000, it is not uncommon to see a homeowner’s taxes balloon from $1,500 to $3,000 or more after the installation of the supposed energy-saving improvements. There are no guarantees these improvements can or will provide the energy efficiencies that were “sold” to the homeowner or the savings to offset the increase in the homeowner’s taxes.

Claudia Polsky, Assistant Clinical Professor of Law at UC Berkeley, and founder of the Environmental Law Clinic says, “Change needs to happen a long time ago.” Professor Polsky said she was a supporter and fan of the PACE program when it was first conceived in Berkeley in 2008, however with so much abuse, lack of regulations and disclosures, and the fact that many of the home improvements made never achieve the promised energy savings, she no longer supports the program. The Berkeley Environmental Law Clinic authored a report, “The Dark Side of the Sun: How PACE Financing has Under-Delivered Green Benefits and Harmed Low-Income Homeowners” which gives several stories from PACE “victims” and offers insight into these flawed loans.

We are grateful to Representatives Roemer and Cutrona for sponsoring this important legislation to protect consumers, homeowners, financial institutions and allow the R-PACE program to thrive if implemented on a larger scale in Ohio. We believe these important guardrails and consumer protections can improve the R-PACE program while continuing to help Ohioans who are seeking alternative financing for energy efficient improvements to their homes.