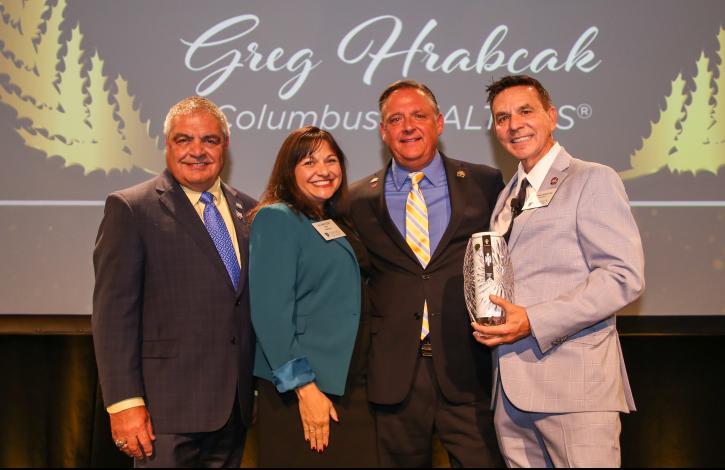 The Vincent T. Aveni Lifetime Achievement Award recognizes those Past Presidents of Ohio REALTORS that provided exemplary service to the organization. Aveni served as President of the organization in 1980 and the award was created after his passing in 2006.

On the local level, Hrabcak served as president of many Columbus real estate organizations including Columbus REALTORS in 2008, and the Columbus Commercial Industrial Investment REALTORS (1993), the Ohio Business Brokers Association (1992), and the Columbus Real Estate Exchangers (1994).

In 2020, he served as National Association of REALTORS (NAR) Region #6 Vice President, representing Ohio and Michigan. He was inducted into the Ohio Hall of Honor and NAR Hall of Fame in 2019. He was also chair of NAR Commercial Real Estate Research Subcommittee and is a member of the Commercial and Research Committees. He is the Federal Political Coordinator for Congressman Troy Balderson. In spring 2022, Hrabcak was elected as NAR Treasurer and will serve his term in 2023-2024 as a member of the four-person leadership team.

He is a real estate class instructor and has developed programs for Columbus REALTORS, Ohio REALTORS and NAR, as well as instructed courses at the Columbus State Community College.

“I cannot think of anyone more deserving to win this award,” said Ohio REALTORS President John Mangas. “Greg’s commitment and passion to this industry is exceptional and he is such an important figure not only to Ohio REALTORS, but at the national level, too.”